Working with family is something that one must avoid at all cost, some people warned this duo. But for cousins Ross Fastuca and David Fastuca, it is something that has thrived very well for them.
BackLet's Chat 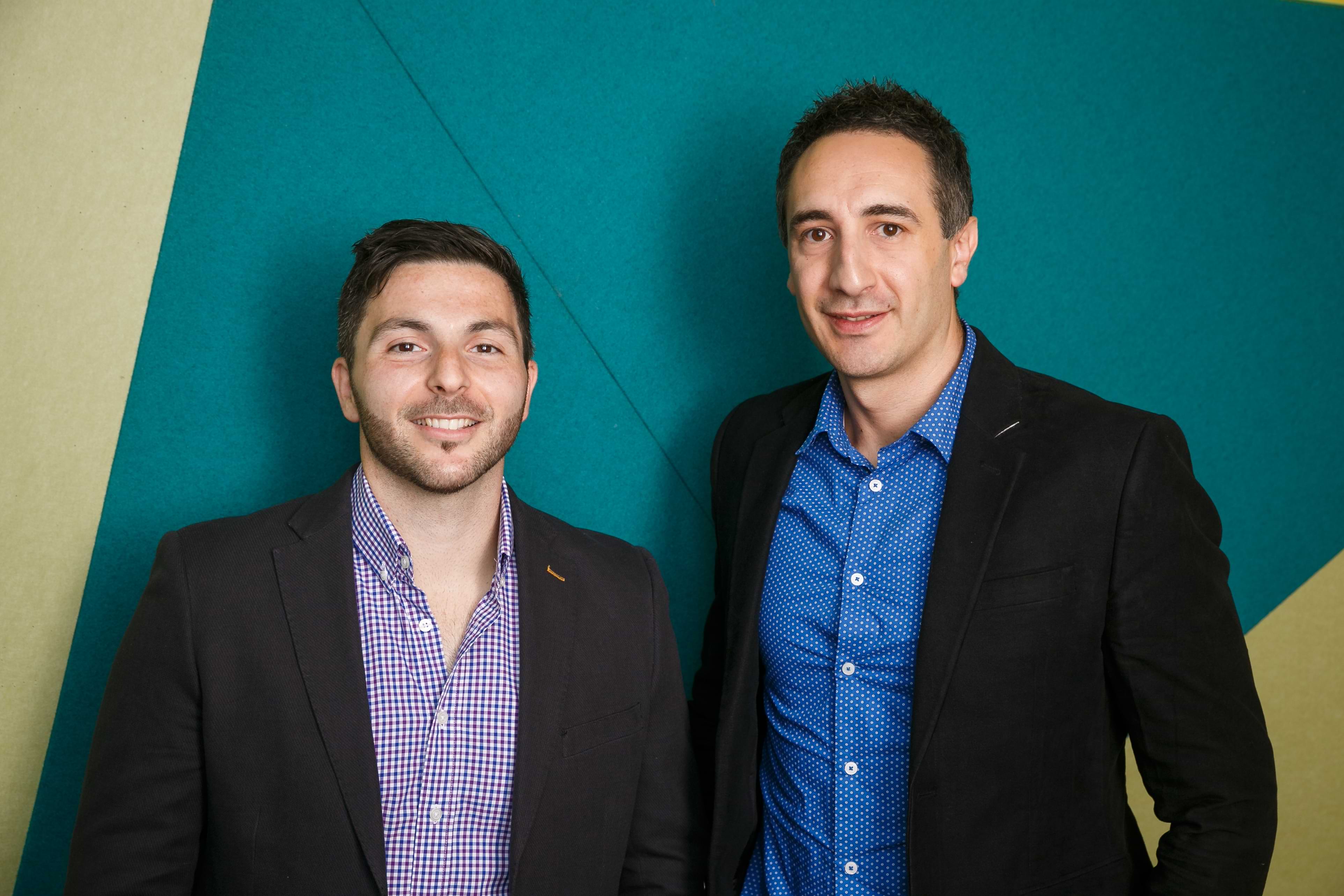 For 16 years of working together in various ventures and businesses, Ross and David have shown that they are a formidable figure when it comes to building a company and steering it to success.“

David and I have always done business together since we were kids,” Ross mentioned. “But I think we did it at such a young age that we probably learned through the years how to completely argue and be very candid and then not take offence to it. That’s how we work together.

We banter so much because we know it comes from a place of care. It doesn’t come from ego.” As business partners, they have established how to make the partnership work. There is no question when it comes to who does what.

As David puts it, “that’s pretty easy because we both have different skill sets. My skill set is design and marketing, whereas Ross is more on product management and technical.
‍
I mean, we do give each other advice and give each other opinions on what each person is doing. So, we never had that issue of who does what.“ With business decisions, we just agree either violently or not violently.

When it comes to skillset, yes, we’re different. But with business decisions, I don’t think we ever made a decision that wasn’t mutually agreed. It’s either we mutually agree or yell at each other for two hours until somebody quits. And it’s not a win either. We just go, oh yeah, you’re right,” Ross clarified.

From health, fitness, entertainment, travel and now with a Kerry Packer style buyback of locomote.com to change the business travel industry once again the duo has dipped their fingers into different industries.

They have started off with businesses that provided services until they found more comfort in product-based endeavours. It seemed that David and Ross have been doing business their whole lives.

Both have their close-knit family to thank when it comes to setting the stage for their entrepreneurial debut. Their grandfather’s coming over to Australia was a typical Italian migration story.

The entire family – Ross’ father, David’s dad, who passed away when David was about three years old, and five other siblings – grew as new generations of Fastuca's came into the picture.

When David had a christening for his daughter, the party that was composed of their immediate family already totalled 80, and it’s still growing. Ross grew up with his dad working from six in the morning until nine in the evening, which happened much throughout his childhood and for about 25 years.

His father started a milk bar in Werribee. “We lived at the back of it while David lived down the street. So, we grew up right next to each other, went to the same school, same secondary school, same university.

We’re basically like brothers,” Ross said. Their parents and all their uncles had small businesses. “I can’t think of an uncle that doesn’t have his own business,” Ross commented.

Although they weren’t poor, they lived basic lives and worked very hard to earn a living. That had a great impact on David and Ross because even as kids, they were doing something to make money.

Ross remembered that time when his dad would give him a box of chocolates to sell at school instead of giving him money by doing chores. On the other hand, David recalled how they were working after school and during weekends, doing projects from the kitchen table at Ross’ mum’s house.

Starting projects and putting their ideas into something tangible were not always smooth-sailing for them. Ross described how they did things during those days.“To be honest, at the very start, when we started doing pretty much everything that we’ve done, we had no idea how to do any of it.

At that time, we were doing so many different random things.”One time, David was able to land a project for a family friend. From there, his desire of starting his venture started taking root.

He had business cards printed out, made up a name for his business, and pretended he ran his own company. He told Ross about it, who exclaimed, “That’s not how you start a business!” Eventually, Ross, at 17, and David, at 14, teamed together to start their first design agency.

At that young age, nothing scared the two of them from diving into the entrepreneurial waters and testing the extent of their capacity. “We looked at it at that time as something as what’s the worst that could happen?” David explained.

“At that age, we were so young. We just tried anything. We didn’t care,” Ross added.“My dad used to tell me and David that there’s no such thing as the word “can’t”. So, I was brought up with that mentality that if you want to do something, just do it,” Ross said.

Despite their exposure to entrepreneurship at an early age, the Fastuca cousins also encountered roadblocks and had many hard-learned lessons throughout their entrepreneurial journey. One particular misfortune was a business deal that got nipped in the bud.

hard-learned“We came up with a brilliant idea that we pitched to an investor. The investor said yes. They loved it. They were going to invest $500,000 to start the project,” David recounted. However, the investor got embroiled in an embezzlement situation. “It was crippling at that stage. It was our first big project.

It was something that would have made us say, ‘Yes, we made it. We’re going to build something.’ And then the next day, we got nothing,” David continued. For them, the greatest challenge is the build mode. Ross finds it as the most stressful stage when it comes to having your own business.

While they were out trying to build something, they also had to worry about getting the right funding, making sure their business model works and growing their team. David shares the same pressures with Ross, too.

“A lot of stress is on ensuring that you’re building the right thing. It’s a good kind of stress, as opposed to not having enough money to pay for staff,” David opined. To which, Ross expounds, “One of the biggest stresses is when you have a bunch of employees in your company."

Especially as a technology company, you need funding. You don’t make a lot of money in the first few years of the company (rarely anyway). The biggest stress is making sure that you have enough money to pay people because they are relying on you to live.

So, you need to be on top of your game to make sure that you can fund what you’re doing and that you don’t leave people out in the lurch.”How they built their venture Locomote was interesting.

The duo got introduced to a travel consultant that led them to a large mining company. As they sat down with this company, they discovered the problems in the corporate travel industry.“

They explained to us how they manage their travel and we couldn’t believe that people would manage anything that way. It was so old and disjointed,” Ross related. They went out and talked to other corporations of different sizes to figure out if they, too, have the same problems.

And they did. They then put their heads together, came up with a solution and presented their ideas through a PowerPoint presentation. “We went back to this big mining company and said, ‘This is what we think will solve your problem. If we build it, will you use it?’ And we got them to agree.

We got them to sign a contract to have it free for the first 12 months and then pay for it after that. We did that before we even had anything. We didn’t have any funding or anything to build this product.”

Although the idea of a small company convincing a giant mining company seemed ridiculous at that time, Travelport agreed to it. Things fell into place. David and Ross got the funding they needed to build their product, which became successful. In the end, they sold Locomote to Travelport in just 4 short, yet very stressful years.

It went full circle. Building Locomote and selling it was the most amazing thing that has happened to David and Ross. And it all started with just a PowerPoint presentation.

And now in 2021 during a global pandemic, they did the unthinkable and bought the company back from Travelport. They have unfinished businesses, with big ambitions to turn Locomote into a unircorn tech company (valuation of 1 billion+).
‍
In retrospect, Ross recognised that surrounding himself with mentors – people who were already ahead of their game– earlier in his entrepreneurial journey would have made things a lot easier for them.

Find some mentors who have accomplished things that you want to accomplish. That is the one thing Ross wants redo if he could just press the reset button. That is the same thing he would tell his younger self if he could travel back in time.

David concurred with Ross. He realised it’s a good thing that they have each other. According to David, “Find people who are going to be blunt, upfront and honest. We’ve been lucky that we’ve been each other’s harshest critics.

Having someone that tells you the truth is rare and hard to find. Ross and David like to be around people who have the same passion and persistence as they do. These are two qualities they believe entrepreneurs should have. “If you don’t have persistence or passion, it will never work,” quipped Ross.

That is why David likens their entrepreneurial journey to someone digging for diamonds and not stopping until he hits the treasure. In contrast, a person who stops digging might just be a few inches away from the diamonds.

But he wouldn’t know that because he already quit. He said, “If you believe in what you’re doing and have the passion for it, then do not give up. There were times when we could have given up.

Just keep pushing through the hard times because you never know when you’re about to crack through to success. For Ross, the journey is something that is comparable to chaos. While most people think of it as a straight line from one end to another, the reality is that the line has many twists and turns.

“It’s like the line goes all over the place. Embrace the craziness. It goes up and down, backward and forward, and then it goes to the end. It’s like the craziest rollercoaster you can ever imagine. You think it’s all going to collapse. And then, it becomes amazing.

You like to do it over and over again. When it’s amazing, enjoy it. When it’s about to collapse, try to work it out and keep it together. Now, the Fastuca's are looking positively to the future.

I mean, inside and outside work and life, in general, we spend a lot of time. So right now, literally, I can throw a tennis ball to David’s house. Our wives are close. I’ve got two kids and David has three kids.

David and Ross are truly fortunate to have each other in their entrepreneurial journey. Indeed, they have proven that blood is thicker than water.
‍